On openness and related ideas 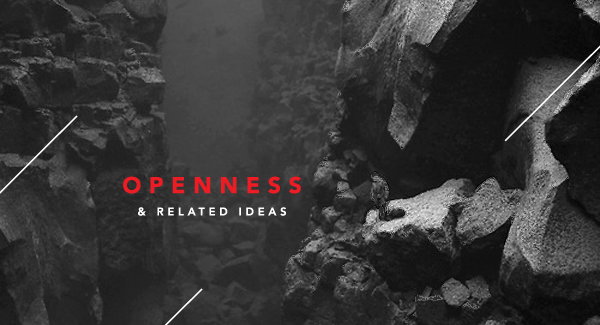 Openness is the big thing for me this year. I’ve been toying with it, trying to see what happens when I stay open as much as possible. It’s something I intuitively decided to focus on and expand in my experience and is an ongoing experiment. I wanted to write this to try to explain what I mean by openness and how it looks in action.

The opposite of openness is being closed or…resistance. A lot of things happen in us, and to us. I notice in myself the tendency to cringe, to tense up and shut myself off from things I don’t like. For example, I’m chilling, lazing around or just mulling things over and I get a call, a client needs something done urgently. Usually my frame of mind is that of resistance, being slightly annoyed at the fact that I have to interrupt my laziness to focus my mind on working. With a mindset of openness however, I don’t fight it, I give in. I may still feel annoyed, but I let the feeling sit and then I move my mind towards the task at hand and try to dive into it as much as possible. Another example would be sitting or working with people I’m unfamiliar with. I would typically tense up and get a bit self conscious, try to do the ‘right’ things or impress. Being open, I focus on relaxing and just being, interacting as naturally as I would with people I was comfortable with, but remaining clear and focused on the present.

Openness as I’ve been experimenting with means not resisting life. It means feeling life. It feels like living turned up all the time, living in a heightened state. It can be exhausting really. But it’s a rich experience. I feel like I lived every texture of every day. My days feel fuller, more intense. When I’m happy, I’m really happy, out right euphoric. When I feel pain, I feel it deep.

The past four weeks, I steadily dropped into a depression. Out of nowhere, I went from being really happy and excited about the way things were going to feeling like someone switched off the lights in my soul. No stranger to being depressed (I think  I’m a bit bipolar), I let it it sit…a week passed and it got deeper. Two weeks in, it was worse. I didn’t judge the depression; I didn’t judge myself for being sad. I just sat with it, lived with it, walked with it. To me, it was just a dark cloud, a condition that would eventually leave. But being open, I probed the feeling for direction and answers and it got me to think differently about a few things and make adjustments in my plans for the year.

Standing apart from the ego

Another vein of openness is being receptive to trying out new things, new ways of thinking and new ways of observing. It’s quite difficult, because you have to stay in a constant state of observing not just your thoughts but the frameworks that define your thoughts, the assumptions, the baselines, the logic behind it all.

I have a perception of myself, a mental image formed over the years based on my interpretation of things I have done, seen and experienced. This is commonly referred to as the ego. Who I am truly is not necessarily the same as this image, and I have had my own fair share of the dissonance that comes when life and my behavior does not match with this image.

Openness means that I stop identifying with this image so much as so I can constantly test out new ways of being. I have a mental image of me as a designer. Is that all I am? is that all I want to do? What else can I do and be? I didn’t think I was a very physical person. Could I actually build a fitness habit of running or exercising? Can I dive directly into the experience of things, maybe things I never considered could be a better fit than what I have now. It’s a fluid way to looking at identity and experimenting with it. Maybe I don’t have to be Oto, maybe I could be something else, or maybe my original definition of Oto as an id is too narrow, perhaps it could be expanded.

These are the ideas I’m playing with. Openness is not allowing the events or circumstances of life to overwhelm and deaden you, but to feel deeply, while remaining completely focused in the now, absorbing the knowledge and lessons that lay in plain sight and taking advantage of the opportunities in front of us.